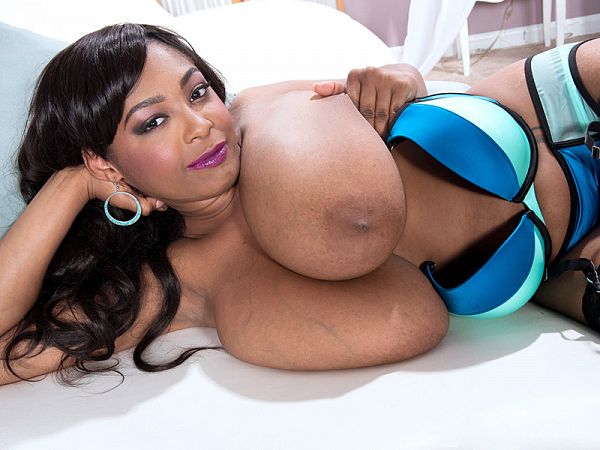 When Rachel Raxxx debuted in the November 2016 issue of Voluptuous, I wrote, "She's 18 years old and has JJ-cup naturals, and if that's not enough to blow your mind, consider this: Girls like Rachel Raxxx don't come along too often. In fact, until she came along, they hadn't come along at all. She's in a super-naturally busty class with Miosotis and Roxi Red, but, let's say this one more time: She's a teenager!"

Rachel was the bustiest 18-year-old I'd ever seen, and I'd seen a lot of busty 18-year-olds, including Christy Marks, Sharday and Mianna Thomas. Readers were very impressed and would vote Rachel Voluptuous Newcomer of the Year for 2016. It didn't hurt that she fucked on-camera with the skills of a much-older woman.

SCORELAND: You ran track in high school. Please tell us how that's possible.

Rachel: Well, my grandmother would take ace bandages and wrap them around my breasts after I put on a sports bra, then I would put on another sports bra after that and a tight tank top, and that would hold them. I was able to run cross-country and do discus and shot-put. It held them, but it made it harder to breathe. I was actually the slowest because I couldn't move as fast.

SCORELAND: How do you use your breasts to please a man?

Rachel: Sometimes I can put them in their faces. A lot of times I don't have to do anything. They just go for them. Grab on them or suck on them. I can wrap them around their penis and jack them off with them. You can do a lot with big boobs. Boobs are fun. I like having them.

SCORELAND: Have you ever been with a guy whose cock was big enough that it didn't disappear in your cleavage?

Register your 100% Free NudeChat4Free account today and enjoy the hottest girls and couples live on cam! No Credit Card required! No restrictions or limitations! Unlimited access to all chatrooms!